Incorporated in 1967, Hurt derives its name from Mr. John L. Hurt, Jr. (1887 – 1964), a local attorney and landowner who bequeathed the land on which it now stands. Mr. Hurt was known for his philanthropy, determination and enterprising spirit. To this day, his life story continues to be an inspiration for those who take time to read it.

It comes as no surprise that the town finds itself nestled in a region richly steeped in Virginia and U.S. history. Neither is it mere coincidence that Hurt is home to a few landmarks, one of which is Clement Hill. Further information on this may be found here.

Hurt commemorated its Semicentennial (50-year) anniversary of incorporation as a town in 2017. 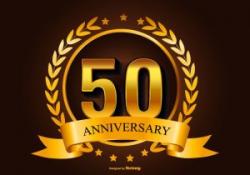 A short program featuring a ceremonial unearthing/opening of our time capsule placed in 1992, a local history lecture by area historian Michael Hudson, and presentation of a recognition letter and certificate from Congressman Tom Garrett was held November 5 at Town Hall.

Though turnout was low and the time capsule contents had serious water damage, we extend thanks to all who attended and/or participated in this conclusion of our Semicentennial event series.